The Love Offering Blog Series: When Insecurities Keep You from Serving God by Marjorie Ochs 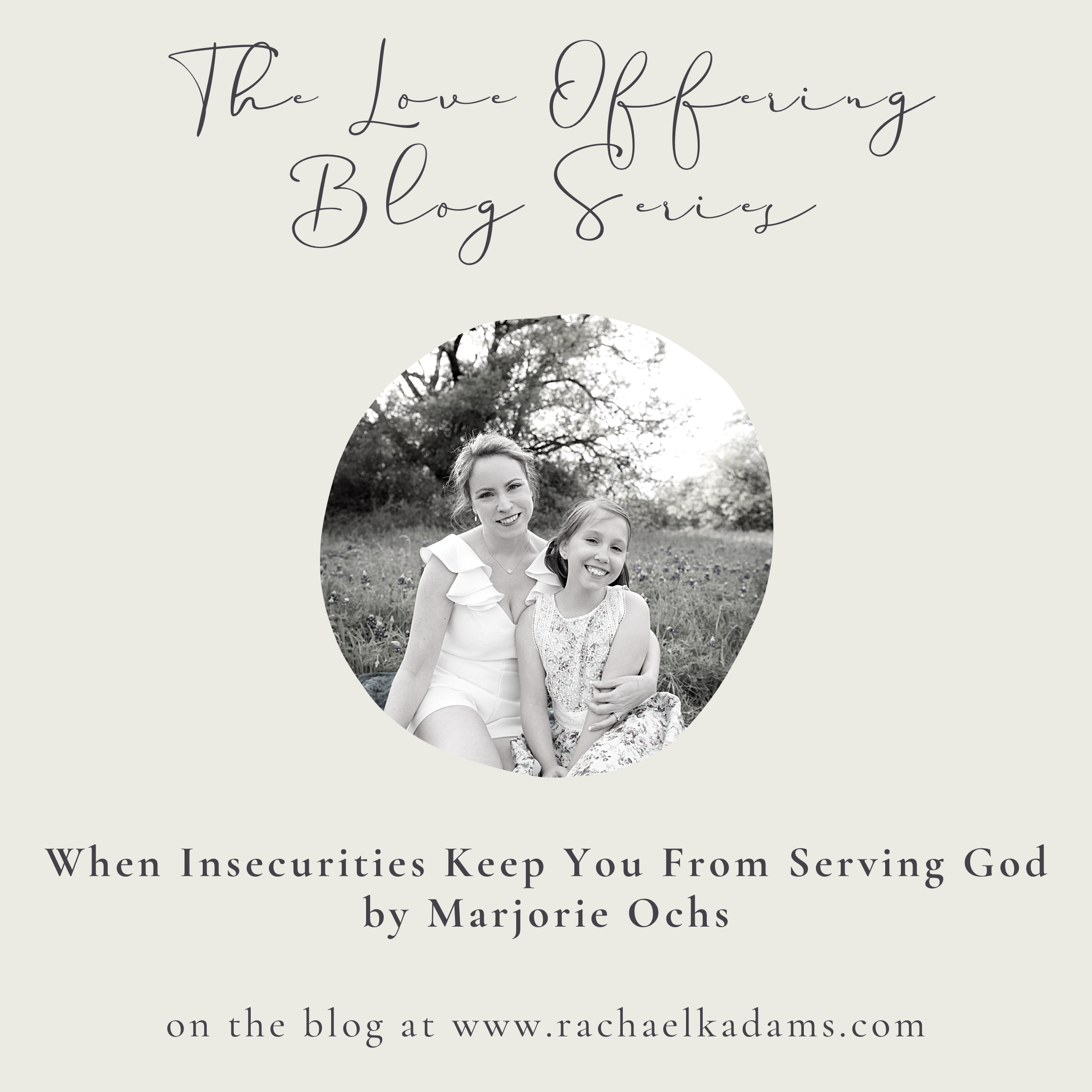 When God first told me to adopt my daughter, Ella, from an orphanage on the other side of the world in Vladivostok, Russia, I was scared out of my mind.  Every doubt I ever had about myself was whispered into my ear. I questioned whether I was a good enough mother to the children I already had, whether I was a strong enough Christian, whether I could handle making three separate trips around the globe, whether I was even nice enough. I thought adoption was for perfect, saintly people who had it all together. But God made it clear to me over and over that, yes, He really did mean me. I was the one He was sending, and He would work out the details.

In my years of doing Bible studies with other moms, I’ve heard so many other women echo the same insecurities – insecurities about whether we’re doing enough for our children, whether WE are enough. You ask yourself questions like, “Am I a good mom? Are my kids going to need therapy because of that time I yelled at them? Am I putting them in enough activities?”

You are an awesome mom. And here’s how I know. I’ve seen the inside of an orphanage, and I know what those children want more than anything else. It’s not toys, not fancy clothes, and not to be involved in every sport. It’s not a perfect parent. It’s you. They want a real parent, someone who cares whether they live or die, someone to advocate for them and love them.

Women are fed the lie that what we do has no great significance to the kingdom, that because our service and offerings happen behind the closed doors of our homes, God does not see us. What I want you to ask yourself is, “Who told you that?” (Gen 3:11) because that is a lie straight from the devil. There could be no higher calling than loving children well and pointing them to Jesus.

Jesus made it abundantly clear how important children were to Him when he said, “the kingdom of heaven is made of such as these.” (Matt 19:14) We are training up saints, God’s army and the enemy would love nothing more than to snatch them out of God’s grasp.

The enemy will use every trick in his arsenal to make you think you can’t do what God is asking.

It’s normal to feel scared, but don’t let the fear control you. Take your fears to God over and over again, and He will give you the peace that passes understanding (Phil 4:6-7). I’ve experienced it firsthand. If I had listened to the enemy and to my own fear and insecurities, I would have missed out on the beautiful plan that God had for me and my daughter. So instead of fearing the unknown or fearing your own inadequacies, focus on the fear of missing out on the blessings that God has for you. He has good plans for you, amazing adventures. Don’t let fear hold you back.

About the Guest Author:

Marjorie Ochs is a mother of 4 children, one of whom was adopted from Russia. Through God’s leading, Marjorie embarked on a journey to the other side of the world and saw firsthand how much God loves His children. She is the owner of The Swanky Stitchery / Calming Covers, a business catering to people with sensory processing disorder, that was birthed through the process of helping her adopted daughter, Ella, to regulate her ADD.